Of all the games I had to start with, it had to be Finding Nemo. This one's for you, Lucy.

You know, I’m not sure if playing Finding Nemo as the first game of the Game Boy Abyss project was a stroke of genius or a portend of disaster. When I was spitballing the idea for the Abyss over on my twitter, one of my dear friends Lucy asked me if I would please, please, please play Finding Nemo due to their own memories of the game. I took one look at this game on youtube and just knew, I just knew, that this was exactly what I was looking for to kick off this project. Finding Nemo encapsulates everything I was looking for when I thought of this idea. It represents the niche of weird, cheap, shovelware-esque gaming that was ever present throughout the GBAs lifespan, but didn’t overwhelm it like it happened with the DS or the Wii. Finding Nemo is exactly the kind of game needed to kickstart the Game Boy Abyss project.

Saying that, Finding Nemo is nothing short of mediocre, forgettable, dime-a-dozen trash.

But I’m getting ahead of myself. Anyone who’s ever played a handheld console knows about the dreaded animated movie tie-in. In the eras of the Game Boy, Game Boy Color, Advance, and DS, it felt like every single animated movie that came out would get a, or in some cases, multiple, tie-in video games. That’s not to say they’re all bad; I’ve played some real, real good tie-in games, especially for the GBA that I’m actually excited to talk about (Lord of the Rings did real well in this regard). But when it comes to animated tie-in games, so many of them are just forgettable, Christmas-buying baiting trash. And whilst it’s not the worst game I’ve ever played - we’ll be getting to -that- real, real soon - Finding Nemo is the kind of game you’ll rarely think of again; with poor gameplay, strange levels of difficulty, and yet fascinatingly enjoyable visuals and audio, Finding Nemo is, for lack of a better term…

Nothing sums up Finding Nemo - and the legion of tie-ins we’ll certainly be seeing on the Abyss project - more than it’s very initial moments. First, you’ve got the cutscenes, a term I use very, very loosely. For what passes as cutscenes in Finding Nemo are simple, incredibly crunched up screenshots from the movie with a smattering of text at the bottom of the screen. After this cutscene - which is only a few frames long and just barely gives you the layout of Finding Nemo’s plot, we can get into the game itself, a fairly middling side-scrolling adventure. But almost immediately, we get one of my favorite tropes in these kinds of games. 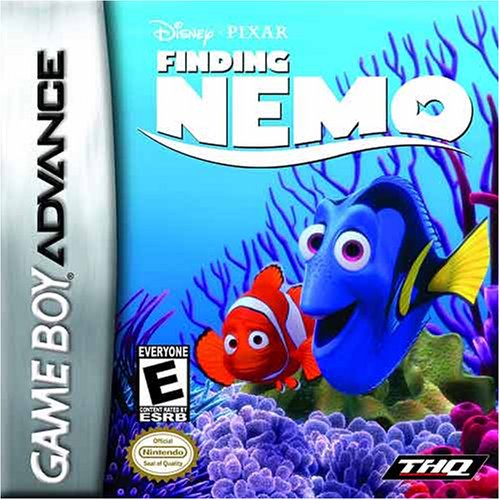 Why are there rings of bubbles? What the hell is a star ring? If these were simple tutorial messages, directed towards the player, I wouldn’t think further on it. But the fact that Marlon is outright telling Nemo about game mechanics that have no basis in the ‘reality’ of the original film, it just rubs me in a way that I find nothing short of hysterical. This is quickly followed by Marlon telling Nemo that he’ll need to ram himself in rocks to clear the way, or feed pearls to clams to close them up, instead of, y’know, swimming around them. I know it’s not actually a problem in any real way, but I just think it’s emblematic of just how silly these kinds of games can get with just throwing dialogue out that just doesn’t make any sense. I dunno, it just tickles me, y’know?

My main point of praise towards Finding Nemo, surprisingly, is in its audio-visual endeavors. Considering this is a GBA game, Finding Nemo looks pretty good, I suppose. It's a blend of 2D and 3D in the side scrolling sections, and the ‘running towards/from the camera’ sequences, whilst playing like actual ass, look pretty good for a twenty year old game. The soundtrack on the other hand is nothing short of insane. It jumps back from festively upbeat, to strangely quiet and eerie, and there are even a few tracks that wouldn’t sound out of place in the Metroid game. Conversely, the music also drove me insane sometimes, with the GBA’s superb sound chip mixed with a few of Finding Nemo’s particular notable tunes feeling akin to a cinder block being shoved entirely through both my ears simultaneously. I don’t hate that feeling - I was just laughing so hard at the soundtrack that it helped me get past how woefully sub-par the gameplay is.

And oh, is it subpar.

Finding Nemo is just so boring. I’m sure you’ve seen this game before - Nemo or Marlon, depending on what section of the film you’re playing out, traverses relatively linear levels, avoiding dangerous fish and rocks and who knows what else, solving the most basic of basic puzzles when a rock or a submarine door bars your way. It is interesting to see that the game eschews violence entirely, using mostly subpar puzzles to progress. They aren’t interesting in the slightest; the amount of brainpower it took One section of the game sees Nemo speaking with various members of the Tank Gang, doing some basic training in the form of minigames to progress in the plot. Not only are these not remotely fun, but you have to do them over and over again to actually progress. This is not good game design, but then again, I’m the guy writing a several thousand word review on goddamn Finding Nemo. Also, as an aside, you know those star and bubble rings you’ve been collecting? ALl they give you are chances to play a stupid memory match game that just unlocks pictures in the gallery. Oh. Big whoop. Unlocking them all gets you nothing. Again. Oh. Big Whoop. Even whilst I couldn’t be bothered collecting many star rings, I still finished them all in one try. Ah. Big whoop.

On the other end of that spectrum, though, it also stuck out to me how strangely brutal this game could be at times; Nemo/Marlon dies to only to a couple of hits, and hit boxes are stupidly large for no real reason. In the crappy minefield level, I died way, way too many times because I apparently struck a mine, despite the fact I one hundred percent did not touch. There are no checkpoints or anything of the sort, and the couple of times I neared the end of the level before dying to some utter crap made me almost drop the game there and then. Also, there aren’t even goddamn saves in this game. This was 2003, and Finding Nemo actually uses a bloody password system. How hard is it to have a save file!?

It can be unfair, sure.

And then there is the filter level. Which is a little more than just a bit unfair. 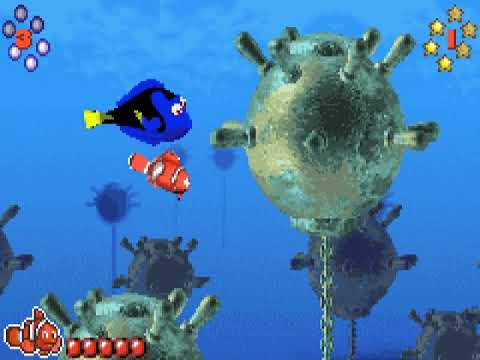 The worst part of the gameplay, and the reason it fell down an entire peg in my head, is the goddamn, thrice-cursed FILTER BLOCK level. Now, in this level, Nemo traverses the most intricate tank filter system ever conceived by man (because of course a normal sized tank needs a filter with several dozen pipes) whilst carrying a blue stone to jam the filter. Unfortunately, you’re being buffeted by currents, making you move The only way I found to be able to progress at the very end of this level was to let Nemo fall back into the filter at the end of the pipe, causing the game’s physics to launch the rock all the way through the current that was up until then impassable. I spent fifteen minutes on this section before I gave up and looked up a solution - and I found dozens of posts from players who had no idea how to progress either. I find it insane that such a level exists. I was ready to call Nemo utterly average, a 5/10, yet forgettable experience. The Filter Block level is one of the worst experiences I’ve ever had in a game, and knocks it down an entire peg.

Due to these points of insanity, I also spent some time wondering how several of my friends told me about this game, and how genuinely meh it was. This drove me mildly insane, since up until now I’d never heard anyone talk about bloody Finding Nemo for the Game Boy Advance. Well, apparently this game sold over a million goddamn copies in the U.S alone! This genuine piece of pseudo-shovelware. It just goes to show you that parents will buy literally anything for their kids, as long as it has a recognizable brand attached to it. It’s the kind of thing you don’t see too often anymore. Sure, we'll still get the really bad tie-in games still, but it’s rare you’ll see something as sub-par and thrown together as Finding Nemo. Also, I just want to point out that Vicarious Visions, the team behind the fantastic Crash Bandicoot remakes, made this game. I love me some Vicarious Visions, but I just dunno. It seems like they put together a lot of these tie-in games over the years, and I think it’s good they recently became one of the teams responsible for such fantastic remakes.

Finding Nemo is one of the poster childs for the kind of game we’ll be seeing a lot of in the Game Boy Abyss. Tie-in titles that, for the most part, exist just to make a quick buck, cashing in on parents buying little Timmy a GBA game for Christmas. It isn’t the worst game I’ve ever played - it’s simply dreadfully boring, and occasionally bullshit, with little that speaks for it then it’s above-average graphics and eerily, hilariously strange soundtrack. If it was any longer then the hour-and-a-half I spent with it, I probably would’ve loathed it significantly more, but as it stands, it’s just a run-of-the-mill, below-average game that I probably won’t ever think of again outside of the context that this was the first game that I played for the Game Boy Abyss.

Don’t play this game. Unless you played it as a kid and want to conquer the demon you never slayed, then just stay away. There are better things you can do with the couple of hours this game takes to blaze through.

Thank you so much for reading my look at Finding Nemo! This is only the start of the Game Boy Abyss project; we’ll be looking at a little bit of everything in the weeks and months to come. You can contact me at cckaiju@gmail.com if you have any requests for particular games, or any constructive criticism to provide. Now, I’m off to write a review of the next game I’ve already finished… what is likely the very worst game I’ve ever played in my life.

So. Yeah. Have fun looking forward to that.