You know when you’re on a rollercoaster, and you hate roller coasters, and just when you’re finally out of that dark tunnel, everything is slowing down, and you’re finally done with this terrible experience? That everything is only uphill from here?
And then, to your horror, the fastest, steepest drop you’ve ever experienced hits you, and you wonder why the hell you got on the rollercoaster at all?
Well, I’ve never been on a rollercoaster, but I’m pretty sure American Idol fits whatever metaphor I was trying to convey there. 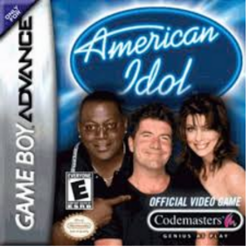 I will not mince words. American Idol is very, very likely the worst video game I have ever played. And I’ve played some real shockers over the years. Superman 64, Balan Wonderworld, Blinx - I even tried out the old Atari 2600 E.T at one point! And somehow, somehow, American Idol outstrips them all in just it’s unique brand of utter awfulness. I don’t even really know where to begin with my impressions on this ‘game’, a term I use rather loosely, since I got absolutely no entertainment from the time I spent with this. On the bright side, I really think I can only go up from here - I mean, could there actually be games worse than American Idol on the Game Boy Advance? Could there literally be -anything- worse, lurking in the depths of the Game Boy Abyss!?

I took a look at the bottom of the GBAs Metacritic list. I, uh, made a mistake starting the Game Boy Abyss, didn’t I?

Well, I digress.
Let’s start with the basics. To begin with, I am, and have never been a fan of American Idol, or any of it’s endless spin-offs and rebrands. In fact, the only reason I played this game was to find something so short that I’d have an early backlog of reviews going whilst I finished more games. American Idol for the Game Boy Advance is ostensibly a rhythm game, where you create your own character and work your way through the elimination-style bracket of American Idol, singly endless hits of the early 2000s, whilst hearing the actual voices of the ‘iconic’ American Idol hosts, Simon Cowell… and the other two who I genuinely do not know the names of. I literally only know Simon Cowell from hearing about him being a raging asshole on the news like, fifteen years ago. And when he was in the Shrek 2 special features. He was an asshole there, too.

But this isn’t a review of Simon Cowell being the asshole that he is. This is about something far, far worse.

So, on a basic level, what I described sounds fine, right?

Almost without fail, every single aspect of American Idol completely, utterly fails at even the most basic level. First of all, this barely feels like a game - it's a rhythm game, sure, where the rhythm bar is a circle around the player character and you’ll have to hit A or B in time with the notes… but that’s literally it. It’s the most easy, braindead, insanely bland gameplay I’ve ever seen in a game, let alone rhythm games in general. There is no strategy in making your way through the American Idol competition - you just gotta hit the right notes well enough and you’ll do fine. There seems to be some sort of mechanic where certain clothes will give you more points from the judges, but no matter how I mixed and matched my outfits, I was always judged to be simply mediocre. So, I made my characters look genuinely as horrific and awful as the clothing and creation options would let me. I looked like some sort of potato man that’d only exist in my deepest, most repressed nightmares… and that was when I got a thumbs up. So, I think that sums up this game’s systems pretty well.

Let it not be said that The Game Boy Abyss didn’t give the game what little credit it was due. Whilst every song sounds uniformly terrible due to the terrible autotune, or whatever the hell they used, coupled with the already hard to work with GBA sound chip, American Idol actually has a pretty decent selection of songs to play through. I Want It That Way, I will Survive… There are some genuine bangers. Also, hearing my awful PlayDough man sing Like A Virgin put me in hysterics so badly that I was a little worried I’d actually fail the song by accident. Not that it’s particularly easy to fail at this game. In fact, the only time I ever really felt challenged in the slightest was it’s final rounds, since the game just speeds itself up without really falling into any real rhythm.
Also - and this probably isn’t really a point in this game’s favor - but actually failing the songs, and I’m talking not even pressing a button, is genuinely hysterical. The result is the generated voice sounding like it’s rapidly going through puberty, their voice cracking and dropping over and over again. Don’t play this game, but you should absolutely take a look at some of the ‘failed’ songs videos on youtube, they are absolutely worth your time.

In fact, take a break from reading about me losing my mind. Take a look at the video below.

And to add to the awful audio-visual nightmare that this game is, the three original (or so I believe, I literally couldn’t be arsed to look it up) hosts of American Idol are rendered in-game in all their… blocky, pixelated, anatomically-incorrect glory. Seriously, if you thought the player character looked horrendous, these are something else entirely. And then they talk. They talk! I’m not sure if Simon and co. recorded any original dialogue for this game or they’ve just pulled audio from any number of American Idol episodes, but it doesn’t matter. The judge’s audio in this game sounds something akin to if I grated cheese directly into a hyper-sensitive microphone. I can -just- barely make out what they’re saying, but the fact is, the first time I heard them judge my wonderfully shite performance, I burst out laughing, unable to believe that it sounded this bad. Seriously, there are games ten years older than this that sound better. And even looking beyond the awful quality, it felt like there were only a couple of lines per judge, to the point I heard them all three or four times in my two runs of the game’s main ‘campaign’, even if I loathe to describe this bite-sized mud pile as having anything resembling a traditional game mode.

This is genuinely, genuinely, the worst game I’ve probably ever played. Three are maybe worse games that I”ve somehow blocked out of my memory, but I can’t remember anytime I’ve been as miserable as this playing, or even engaging with any entertainment product. And to underline just how bad this experience was… I did everything there was to do in this game, including a playthrough of the elimination bracket main story -twice-, once as a male and female singer each, all in the span of thirty-four minutes. I had a miserable, miserable time, despite the fact that, again, this game is thirty four minutes long. I even tried out the main side-mode… which is just survival-based, go-as-long-as-you-can mode. Because I want to sit right there, trying to play American Idol of all things, as long as possible.

No.
So if any of my vitriol hasn’t gotten through to you, let that. I played this game for THIRTY FOUR MINUTES and it already ranks amongst the worst pieces of garbage I’ve ever played.

I’m… enraged, even thinking about it. 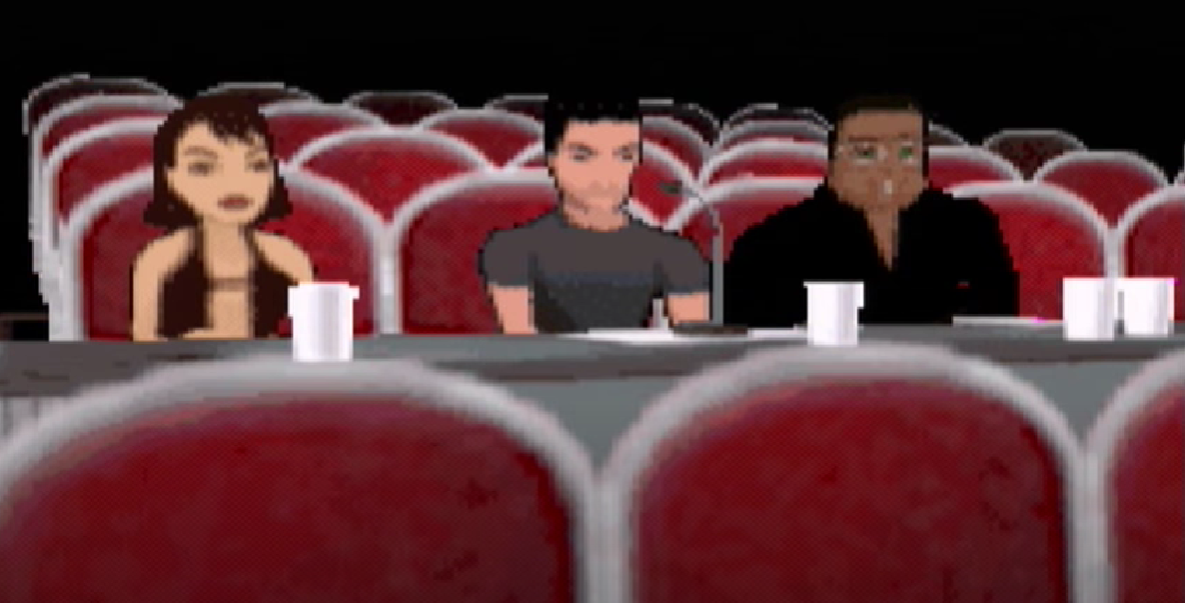 I really, really want to know who this game was bought for. Considering this was 2003, I feel like the venn diagram consisting of both American Idol fans and owners of the Game Boy Advance did not have any kind of massive crossover. I really wish there were some sales data out for this game, because I feel like this is one of those games that a relative with no gaming knowledge whatsoever would buy for Little Susie who apparently loves American Idol for some godforsaken reason. I’m not knocking the fans, but I just don’t understand the appeal. I don’t understand the appeal of reality television in general, but anyway, I’m not here to critique American Idol, I’m here to critique American Idol.
But what else can I really see? This is a tiny, bootleg-esque, minimum-effort game that was made to sell as quickly as possible whilst costing, I assume, as little as possible to produce. What else can I really say? There’s nothing here of substance once I get past my unbridled rage/

Don’t… Just don’t play American Idol. I played it for a laugh, so I got ahead on my backlog and actually have something to write about, but I didn’t think it was bad. This game took me only 34 minutes to reach what I believed was ‘completion’, and that alone felt too much for me. It sounds bad, it looks bad, it plays terribly, and even though I ranted in my last review about how much of cash-in Finding Nemo was, I think American Idol might be the absolute bottom of the abyss of licensed video games, let alone GBA games to start with. This is terrible, awful, utter garbage, and I feel like a stupider person for even trying it. In some cases, I feel video games of today are missing something, since we don’t really get fully licensed games that are quiet of this caliber… but at the same time, if we had more games like American Idol, it feels like I might’ve gone mad over gaming a long, long time ago.

Don’t play American Idol. Touch some grass. Hug a pet. Burn your copies of the game. Read a book. Remember to check in on your favorite Game Boy Advance websites every week for new reviews. Have a nap. Play a better video game.

I’m gonna go have a lie down, methinks, because I can’t  believe I wrote over a thousand and a half words ranting about goddamn American Idols. Use your time wisely kids. I ain’t getting those thirty four minutes back, that’s for sure.

Thanks for checking out my review! I had a terrible time playing American Idol, even when it took me only 34 minutes to finish, but there’s hope on the horizon.
If you’ve got a game you’d like me to check out, message me at cckaiju@gmail.com, or dm me @Lemmy7003 on Twitter.

The next game I’ll be taking a look at will most likely be one of my old favorites on the GBA I haven’t played in years - Summon Night: Swordcraft Story! Look forward to it!