Ah yes, it’s that time again - the time good ‘ol Mitch can’t be arsed to review an actually normal sized games. Come on, I’m working on Shin Megami Tensei for next week, I had to play something short’n… whatever this game is. Some say brevity is the wit of the soul, but there is nothing witty or soulful about Planet of the Apes for the Game Boy Advance. From minute one to game’s end, the game is exactly what it says on the tin - a licensed, somewhat confounding 2D platforming cash grab, thrown out simply to have a game on the shelves to promote a… very unevenly received reboot of Planet of the Apes? Uh, yeah.

Look, I’ve got nothing witty to open this review with. No personal stories, nothing. Let’s just… Let’s just get started.

The game itself is a rather run-of-the-mill, visually unimpressive 2D platformer. As Brent, or whatever the hell the main character’s name was (bootleg Charlton Heston, I dub thee) leaps, rolls, and generally makes a nuisance of himself as he navigated that terrible planet of the apes (THAT WAS OUR PLANET!!!). Enemies only come in two varieties - wild enemies that’ll just run at you and beat you to death, whilst the titular Apes that live on The Planet of the Apes will not only beat you to death, but will also just shoot you with all kinds of deadly firearms. I swear to god I’m not trying to pad out this word count, I just… I just don’t have that much to say about this game. It’s the kind of game you take one glance at and you’ll know exactly what kind of game it is.

Bootleg Charlton Heston, of course, isn’t left to face the terror of the Planet of the Apes empty handed. As the game progresses, you’ll start with a simple knife, but will quickly unlock a number of other weapons that simply grow in firepower. There isn’t much to combat itself, beside how horribly bland it is, and how clunky it is to get started. You need to stop moving, hit the L or R buttons to cycle through your inventory, hit B to bring out your weapon, then hit A to actually fire your weapon. Of course,you’ll have to deal with enemies being able to shoot you pretty much as soon as you’re in visual range, inevitably leading to damage taken, and if you’re face to face with the enemy, your bullets are just going to miss all together. To make matters worse, there isn’t any real variety to what you’ll be doing; gunning down apes and rolling through holes, that’s the life of Bootleg Charlton Heston, with nary a boss fight nor puzzle to speak of. All you have to mark one level from another are its various background theming, but nothing really changes between them, sans a different environmental danger here and there.

Despite having never seen the Tim Burton rendition of Planet of the Apes - beside it’s stupidly confusing ending - it quickly became clear to me that despite throwing the poster of the 2001 version of the film on the cover, the Game Boy Advance version of the game actually doesn’t even follow that version’s plot! Instead, we get, strangely enough, not even the original Planet of the Apes. Oh no, that would make too much sense, now, wouldn’t it? No, we get a very rough adaptation of the -sequel- to Planet of the Apes, the aptly titled Beneath the Planet of the Apes, which is generally considered much worse then the original classic. I… have no idea why they did this. It would’ve made the most sense if they’d just done Tim Burton’s version, and it would’ve been understandable, if a little odd, to do the original… but why Beneath? Why the sequel that I doubt most people in the early 2000s had even seen? It’s genuinely one of the most baffling developmental decisions I’ve seen in a long, long time. Now, in all honesty, that previous paragraph is padding, because there is almost no plot to speak of in this game. In true licensed game fashion, you get a couple of genuinely awful looking stills with a few lines of text under them, and that’s all the context you’ll get for why you’re jumping and rolling around the Planet of the Apes. To its credit, you do kinda get an extreme SparkNotes understanding of the game, but still, it’s barely anything.

What’s a little more fascinating is in how Planet of the Apes looks in its minute-to-minute gameplay. A month or so ago, I played Atlantis: The Lost Empire, also made by Ubisoft, and to my surprise, whilst the art direction itself is rather distinct from Atlantis, Planet of the Ape’s actual character ‘models’ have the almost exact same style and range of movements as the ones in Atlantis, which in itself seemed to take much of its inspiration from the original, 2D version of The Prince of Persia.

So, without further ado, I describe Planet of the Ape’s visual style in the way you all came to see. Ahem.

Now that that’s out of the way - mostly for me - I don’t really care that Ubisoft just pulled the animation styling from Prince of Persia and Atlantis - it’s a distinctive enough style, but it just disappointing to see how much jankier it looks then the aforementioned games, especially compounded by just how much shorter Planet of the Apes is then both those older titles. It… it doesn’t look bad, I guess? It feels awfully generic, and there really isn’t enough variance between the various levels - half this game is either desert or ‘desert city’, whilst the rest are just caves, mountains, or in a slightly more interesting twist of fate, a lost, buried civilization. Even then, many of the levels just blend vaguely together, and I probably have something actually interesting to say, if only any of these levels were actually interesting - and it’s not as if there’s that many levels to experience, as my time with Planet of the Apes clocked out at about an hour and a half, which is probably even shorter then any of the films it’s based off. 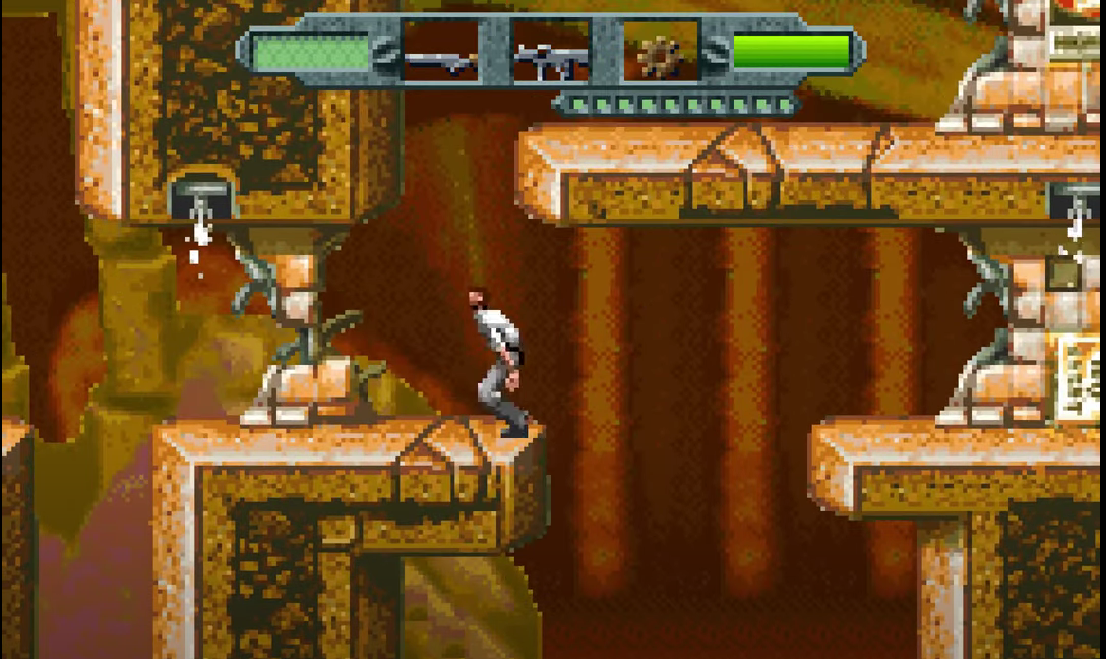 Now, what I can say that is more insane than interesting is the fact that I’m pretty sure this game has one song. Singular. Either that, or it has a bunch of songs that sound pretty much the same, and my brain just didn’t care enough to hear the difference. Since you start in a vaguely desert-looking environment, they clearly decided to go with a desert-esque theme… and just kind of kept that singular audio theme going for, y’know, the entire game. And by ‘theme’, I mean, literally the only song. And it isn’t a good one, that’s for sure. Since I was playing this via a GBA emulator, I eventually opted to just play it without sound, usually listening to a podcast as I played, but I just had to check a longplay to see if there indeed was only a singular song. So, yeah. Great stuff, Ubisoft.

Overall, it’s just such a cheap, dare I say, pointless game. There’s nothing here of note, from chimpan-a to chimpan-zee. It’s a markedly embolic depiction of the very worst that licensed games have to offer - an extremely short length, little variety in gameplay objectives, a singular song… there’s just nothing here that’s notable even in the barest sense of the word. To make matters worse, it’s not all objectively awful - I didn’t like this game, as you’ve obviously, and hopefully, understood from this review, but I didn’t hate it. It had a handful of frustrating moments, mostly with a poor leap here or enemy clipping into Bootleg Charlton Heston here, but I didn’t have the most awful time. It’s just such a below-mediocre experience that after half a week since I played it I struggle to remember the good or the bad.

It’s frustrating, because Planet of the Apes for the Game Boy Advance really isn’t so awful. I can poke fun at it, but doesn’t really excel in any real way for me to praise it. It’s good the descent animation style on it’s characters, and the overall visuals are… fine, but it’s total lack of musical diversity, ping-ponging between ridiculously easy and annoying frustrating, janky controls that function -just- well enough to not quit the game there and then, and incredibly short length just… Man, maybe I did like this a whole lot less than I realized. Even if you’re a fan of Tim Burton’s Planet of the Apes… well, don’t play this, since it’s not even an adaptation of that move in the first place! The fact is, this game is such a nothingburger that it barely exists at all - a cash-grab, nothing more. It’s nothing more than an embolic, curious example of how lazy and half-hearted licensed games there are. For every Astro Boy: Omega Factor and Lord of the Rings: The Two Towers there are, we get a dime-a-dozen Planet of the Apes.

Thank you for reading my review of Planet of the Apes, such as it is. This is just meant to be a bit of a throwaway review, as I get ready for my next big, Halloween-themed review - Shin Megami Tensei! As always, you can find me over on Twitter @Lemmy7003, or you can email me at cckaiju@gmail.com if you have any questions or requests. As always, thanks for reading, and I’ll see you in my next review!