When I started the Game Boy Abyss project, I knew I’d be playing more than a couple of bad games. Hell, I started with Finding Nemo and American Idol of all things. The worst so far, American Idol and Crazy Frog Racer, are genuinely some of the worst games I’ve ever played, but their short lengths and the sheer stupidity of what I was playing got me through it. But there are… other games. Games that are genuinely, almost atrociously bad, but are still very playable. Games that are nothing short of miserable to actually play, with none of the hilarity or insanity that can get a laugh out of me. Today, in The Game Boy Abyss, we take a look at the Game Boy Advance version of Pac-Man World.

Pac-Man World is kind of a weird one from the get-go; this is a remake of the classic PS1 game that released in 1999, a fantastic title that whilst absolutely trying to cash in on the ‘platformer mascot craze’ that was sweeping the PS1 at the time, managed to carve out it’s own niche and it’s own weird little vibe. For some reason, five years later, they decided to remake (or demake?) the game to play on the GBA. I’ve tried, but I can’t find any information on why they decided to remake this game of all things on GBA. As it is, Pac-Man World is a fairly standard 3D platformer; you’ll be navigating a host of themed levels, jumping gaps and slamming your ass (does Pac-Man have an ass? Is he all ass?) on enemies to bring them down. The more unique skills Pac-Man has are a sort of roll charge, akin to Sonic the Hedgehog’s spin dash, and an ability to throw power pellets, though the former is only really used for platforming, and the latter I didn’t ever use once since its range was completely garbage. But beyond this, Pac-Man World just felt pretty run of the mill for the most part; and that wasn’t a bad thing! Sometimes nothing feels better than just playing a chill, familiar game.

I wish this was a chill, familiar game, honestly. 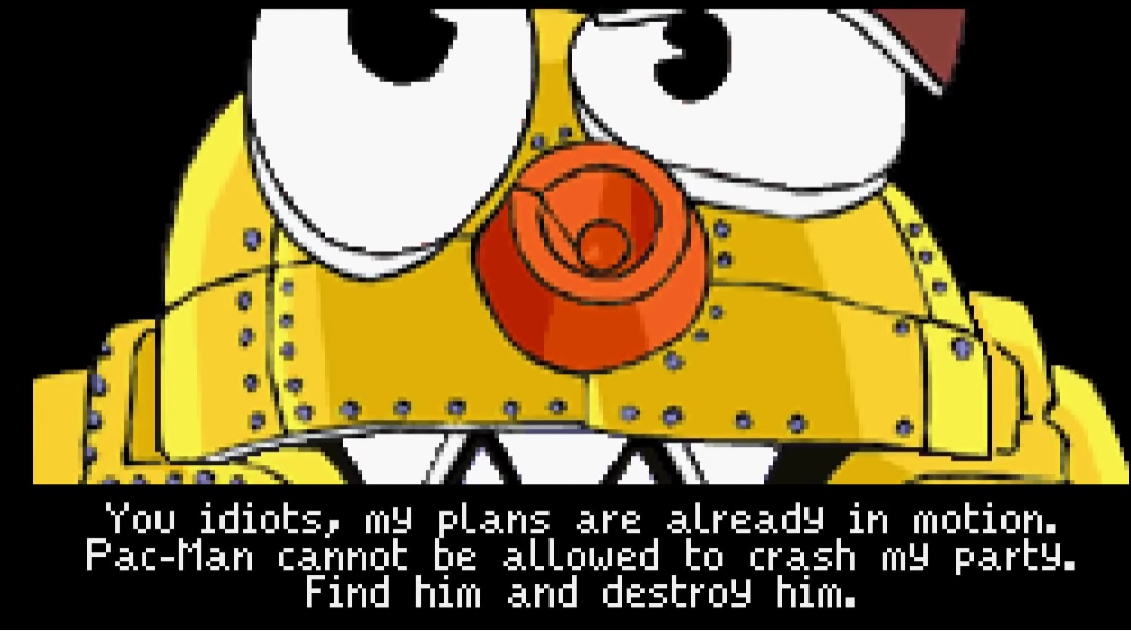 When I booted up the game, ignoring the static cutscenes proceeding it (I’m not expecting FMVs or anything, come on) and I loaded into the first, pirate-themed world, I was optimistic; it very genuinely felt like a, admittedly stripped-down, version of the original game, with an almost one-to-one replica of the first level. Hell, throughout the whole first world I was in! Sure, the music was very, very crunchy, there was a noticeable amount of janky platforming and there was nothing really linking the levels together, but I was having fun with an above-average platformer. It wasn’t blowing my mind or anything, and it didn't hold a candle to the original, but I thought ‘man, this isn’t bad at all. I wonder why fan reviews are so harsh?’.

Well, the issue was that I beat the first world, and kept going. I swear, this game is held together with hopes and dreams. Whilst the first level was generally quite breezy and easy to get through, the difficulty spikes hard past that, and not for any kind of fair reason, but we’ll take this one at a time, no?

First of all, I understand why this game went with an isometric platformer perspective; they wanted to try and retain the satisfying 3D platforming of Pac-Man World on the PS1, but the way they went about this in the GBA version did not work. To put it plainly, the perspective is complete garbage. The amount of lives I wasted playing through this game, leaping towards a platform only to find I was too far back or too close to or from the screen were so common it made me want to rip my hair out. I just don’t understand why they designed the game this way; it would be so easy to fix. Just put some greater indications saying ‘yeah, it’s okay to jump from here, you’ll be fine’ on points you’ll be jumping from and that would improve the game tenfold. The issues with the game’s ‘difficulty’ extend beyond the platforming, for as the game wears on, the enemy hitboxes seem to grow bigger and bigger, stretching far beyond. Also, to be completely open, this issue killed the game for me; I was in the last world, and I lost four lives in a row attempting to make a jump, and I just couldn’t run through the levels again. I don’t care that I didn’t finish the game, I played far too much to actually want to finish it. Didn’t think bloody Pac-Man World would be the first game I didn't finish for the Abyss, but here we are. Sue me, I guess. 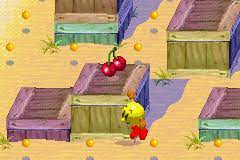 At this point in the gaming landscape, many platformers had evolved a little bit beyond just ‘reach the end of the level’. Sure, that’s always been the main goal, but there are always little objectives to the side; for an example, a previous game I reviewed for the Abyss, Crash Bandicoot: The Huge Adventure, replicated it’s parent system by incorporating it’s iconic clear gems and time trial systems, drastically increasing the replay value of these levels. There’s none of that in Pac-Man World; the only real collectible is collecting the six letters that form PAC MAN, which doesn’t seem to give you anything outside of an extra life. There are also rescuing the various members of the Pac-Family, but that pretty much seems to be mandatory, so I don’t really want to lump that in with the whole ‘replay value’ idea. I dunno, this game came out in 2004; with the platformer genre changing around it, even when the original came out in 1999, Pac-Man World just feels woefully undercooked for what it is.

Also to be brutally honest, the game sounds absolutely terrible. It uses songs from the original PS1 version, including the pirate theme which I’ve lovingly called Sea Shanty 3, but I expect you know where I’m going with this. We all know the Game Boy Advance’s sound chip isn’t great, but it really can lead to some wonderfully nostalgic, comfy beats despite the poor quality. Pac-Man World for the GBA does not have that special vibe. The sound compression for this game makes the music sound like I have inserted a rubber nail into my ear and I’m hammering them in with a steel hammer. I spent nearly my entire playtime with my game muted, only turning on to hear if each world’s song was better than the last. Whilst none were as ear-grinding as the pirate level’s song, none of them approached what I would describe as good, or even mediocre, so I was back to muting them.

If I had to say something good about this game, it is that it looks pretty good considering it’s a demake of a PS1 title. Not great - there were some genuinely incredible games coming out for the GBA in 2004, such as Mega Man Battle Network, or Kingdom Hearts: Chain of Memories. It’s serviceable, but little beyond that. 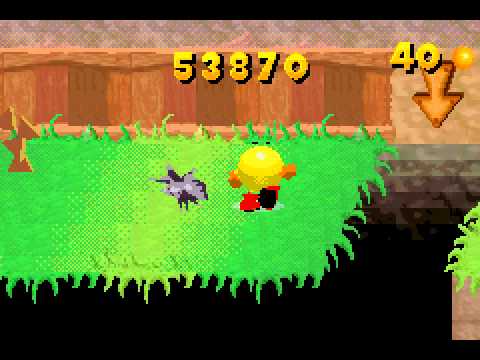 Man, I feel like such a jerk slagging off this game, but I just really, really didn’t enjoy pretty much any of my time with it, especially after the first world. If there’s any saving grace, besides the okay-ish graphics, is that Pac-Man is very, very cute. I’m very fond of Pac-Man World revamping his design to the one we’ve seen in stuff like Smash Bros, so I guess Pac-Man World gets points for that… though, now that I think about it, that has more to do with the PS1 game then this… thing.

Whilst Pac-Man World is not the worst game I’ve played for the Game Boy Abyss so far, it is certainly my least favorite, if that makes sense. The worst games I’ve played genuinely made me laugh or groan in a way that felt amusing or memorable, but there was none of that in Pac-Man World. This game barely functions at times, having some of the worst audio on the console and a design ethic that just doesn’t work for the platform. It’s short, only lengthened by frustrating, unsatisfying difficulty and it’s only saving grace - it’s graphics - are only notable in a vacuum, being outstripped by a majority of the titles releasing the same year. There are so, so many platformers available on the Game Boy Advance - I may have only played a handful in my life, but I can tell you this; Pac-Man World should be near the very bottom of your list.