Happy Feet: I Don't Got Those Happy Feet

Genuinely one of the reasons The Game Boy Abyss came into being was just me laughing about with friends how terrible some of the licensed games were on the GBA. I mean, it wasn’t an issue like it was with the DS or the Wii, or even the Switch nowadays, but the GBA has some real trite, as we’ve already seen with crap like Finding Nemo or… ugh, American Idol. So, I figured that it’s been far too long since I’ve covered another ‘classic, animated movie tie-in game’ on the Game Boy Abyss, and I was desperate to find something just that little bit better than the ones I’ve played previously. 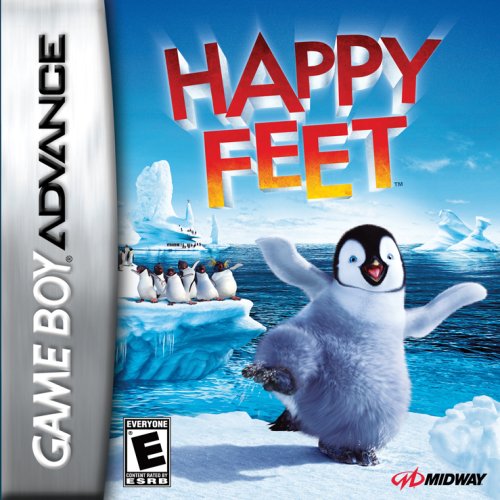 Now, if I had one wish right now, it’d be going back in time a week or so, and asking the Mitch of a week ago, if you were thinking along those lines, why did you play Happy Feet of all things?

If anything, Happy Feet’s biggest claim to fame - at least in my circles - is the fact that it was directed by the goddamn creator of Mad Max of all things. Mad Max, one of the most violent, genuinely insane movies… ever… and he made Happy Feet? It boggles the mind.

Happy Feet’s GBA tie-in game roughly follows the plot of the movie - you play as Mumble, a penguin who can’t sing in a strangely music-centric penguin society, but has the strange little quirk that means he dances like an absolute madman… and everyone thinks he’s causing the end of the world? He’ll go on a journey, meet some friends, blah blah blah. Happy Feet isn’t a particularly engaging movie - yeah, climate change is important, but I’m not sure if 2006’s Happy Feet was the most successful way of explaining that to hyperactive kids who just wanted to see the funny penguin dance. And if that movie’s story was unengaging, that makes the game something else entirely.
The game is one of those platform-minigame hybrids, where you’ll be spending spending about half your times playing some of the most snooze-worthy platforming, and the other half playing through a number of minigames that can range from the central rhythm game mechanic to stuff like sledding down a mountain. It also has some vaguely weird elements where you’ll get a handful of now abilities by completing tasks, but it really just feels like a contrived way to gate your progress and stop you from moving off track. 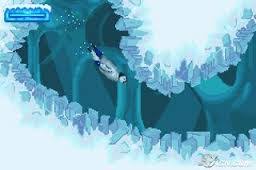 I’m just gonna say it. Whilst this game’s actual quality might be a bit higher then something like Finding Nemo, it’s somehow just that much more BORING then it. I swear to god, 90% of this game is just a snore.
Platforming makes up the bulk of the game, and I call this a platformer in the most loose definition of the term. Mumble will shuffle - slowly, I will say - back and forth across various locations, usually following the instruction of one sea creature or the other. Usually the goal will be to learn various dances from various penguins, but they’ll normally have some banal task for you just to remind you, y’know, that this is actually a video game. And these are some STUPID tasks. ‘Oh, I lost my four nieces, can you find two out of four of them for me?’. WHY WOULD YOU ONLY WANT TO FIND TWO OF THEM!? WHAT ABOUT THE OTHER TWO!? One section has you obtaining fish for a monstrous seal, which is all fine and good… and then once you get out, you progress for a minute or two… and you have to go and find a DIFFERENT kind of fish from the SAME FISHING MINIGAME. The latter case is annoying, but the former is just lazy gameplay - not even recycled gameplay, lazy gameplay. This is most of the game, and it blatantly sucks. Any real narrative in this game is obsucred by these stupid tasks.
Full disclosure, this is the third game in the Game Boy Abyss I didn’t finish; Pac-Man World I quit because it’s bad, Sims’ Bustin’ Out because I just didn’t have the time, and now, Happy Feet because this game genuinely bored me to tears… and it’s bad. So there.

One of the biggest draws of the game, and the movie itself, was the fact that Mumble the penguin can’t sing like the other penguins - instead he dances. One of the main minigames of Happy Feet GBA is a rough - and I mean r o u g h - Dance Dance Revolution-style rhythm game where you just hit the button at the right moment to earn points. I get this is for kids, I really, really do, but good lord is it maybe the most boring rhythm game of all time. Notes come at you like a snail mixed with a trilobite, and the degree of flexibility the game gives you in the amount of notes you need to hit, and how close the note has to be to the ‘button’ to count is ludicrously generous. Surprisingly, the music of Happy Feet is actually pretty decent, being more uncompressed then most other GBA games, but the fact that these songs drag on for more then four minutes, and the game plays the EXACT SAME SONG mere MINUTES after you finished the last rhythm game sequence… It's insane. It’s for kids, I get it, but I can’t believe a group of people designed the game that way. Use some of the other songs from the movie! Maybe create an original song! Just anything then this terrible reuse, resulting in an already boring minigame which is a CENTRAL PART OF THE GAME literally almost putting me to sleep. I’m not kidding, I was getting drowsy playing this. Besides the start of the songs, where you get a solid five or so seconds of Mumble dancing his heart out to near-total silence. I genuinely laughed my ass at it, it’s so stupid. It’s great. 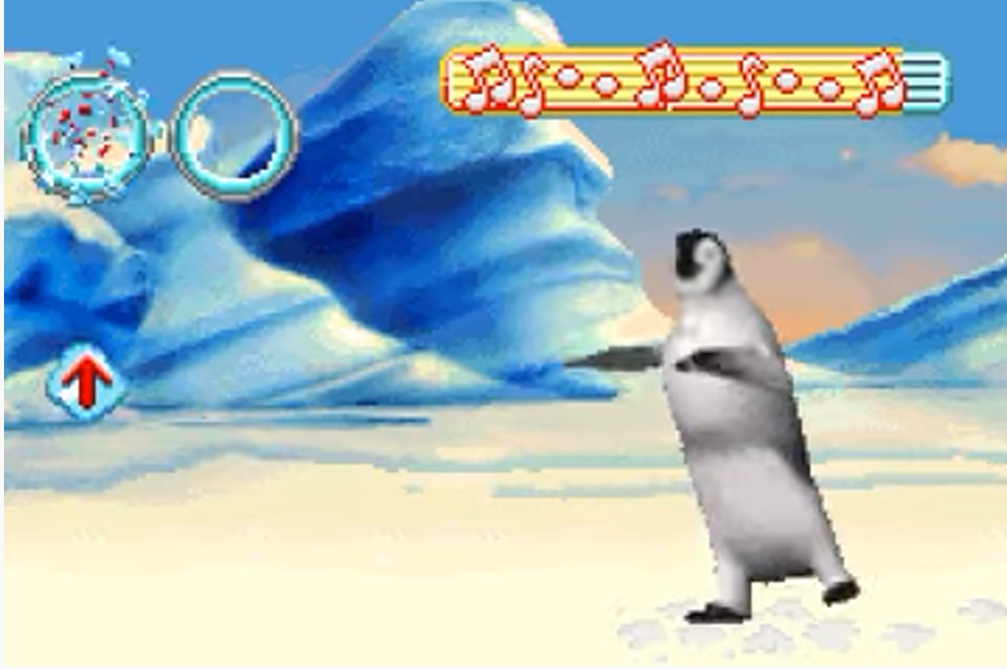 Also, whilst the songs are mostly legible, there was one song that made me have to check if my game was bugging out, because the sound coming from my speakers sounded like tons of bricks being thrown onto snow with a microphone riiiight up against it. It was madness.

If I’ve got anything good to say about the game, it's that its other non-rhythm based minigames are actually quite fun. The diving-fishing minigame has a hell of a vibe (when the minigame isn’t being spammed multiple times in a row), and I genuinely really like the snow sledding minigames. I think this game - as weird as it sounds - would’ve been way better if it was just a rough minigame collection that covered the movie. Greater focus on the rhythm game, maybe have a slightly more robust selection of minigames to play through. I just think the game’s platforming sections are so weak, development time could’ve been used far better if they focussed on the sections of the game that are, y’know… good? I dunno, I don’t know how to make games, this is just some wanker’s opinion.

Outside of said snow-bricks sounding songs, I will admit the audio-visual production values of the game aren't that bad. It’s not blowing my mind or anything, but the sprite-work is eye-catching, and I was honestly quite surprised by how uncompressed and catchy much of the non-rhythm game music was. This game sounds great, which is especially impressive considering that this is, a. A GBA game, which historically has fairly shite audio quality, and b. Happy Feet of all games. Seriously, if this game had an actually decent rhythm game mode to it, this actually could’ve ascended past the rank-and-file tie in games that make it’s peers. It's really a shame.

Whilst we’re talking about visuals, and this is more a critique of the movie then anything, but why does Mumble’s mum have a mole where a human’s book would be? Did they have to go that far to show that she’s a female, potentially sexy penguin!? I’m kind of horrified that I typed out that sentence, to be honest. 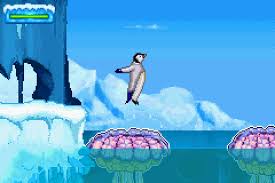 The fact is, this game is for little kids who really, really, REALLY liked Happy Feet and little else. I’m a 20-something weirdo who’s reviewing this as part of a greater project. It’s not a good game, but I could see a kid getting something out of this. It’s not long, no longer than two or so hours, but it’s the kind of game that can be frustratingly annoying, so they’d probably get more time out of it. So, uh, if you’re a Happy Feet diehard, maybe you’ll have a good time, but for anyone else, stay away.

I know this review went kind of off the rails, but how much can I really talk about fucking Happy Feet GBA? It’s everything wrong with tie-in games on the GBA, but somehow succeeds in turning its successes into failures too. This game isn’t just bad, it’s boring, with some of the most soulless, padded ‘platforming’ I’ve ever seen, and when it’s main gimmick is as sleep-inducing and flat out boring there really isn’t much to see here outside of some decent visuals and surprisingly uncompressed music. Happy Feet isn’t good, but beyond that, it just kind of exists. I thought I’d have more say on it, more to rant and rave about, but at the end of the day it’s just another cash-grab of a tie-in so Little Timmy can have his Christmas game. Or if you really, really like penguins.

Thank you so much for reading The Game Boy Abyss! Trying to build up a bit of a review backlog, so expect a couple of shorter, bite-sized entries in the coming weeks, ones that’ll… uh, hopefully be a little more engaging than Happy Feet. As always, you can email me at cckaiju@gmail.com, or message me @Lemmy7003 on Twitter if you have any questions, or want to recommend a specific game to me! Thanks for reading, and I’ll see you in my next review!