There are more than fifteen hundred different Game Boy Advance games officially licensed by Nintendo; and it’s crazy to think that I really only know a fraction of them, to say nothing of how many of them I’ve actually played. That’s the most exciting thing about The Game Boy Abyss project - I get to play so many different games I never dreamed existed on a platform that was, and still is, so dear to me. This mindset, I feel, is encapsulated in today’s game: Gunstar Super Heroes, a run-and-gunning sci-fi adventure that pushes the GBA’s specs to the limit that I genuinely never knew existed, even if I’m a pretty big fan of developer Treasure (they made Astro Boy: Omega Factor!)’s work on the GBA. 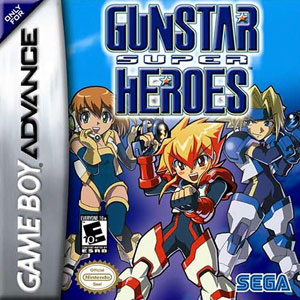 Beat’em ups and run’n’guns are a genre I’ve had a bunch of older history with; my Dad, back in the day, had a disc that had thousands and thousands of arcade games on it. I played all the classics like Galaga and 1942, but the games that stuck most with me were the beat’em ups, fantastic titles like the Punisher and The King of Dragons. When I started playing through Gunstar Super Heroes, I kind of got brought back to those days, complete with the variety that sometimes came with those weird arcade titles. Maybe that’s why I like Dynasty Warriors-style games so much - I just adore carving my way through endless, endless mooks. Just a little aside, before we get into the review proper.

Can we get a re-release of The Punisher, by the way? Please!?

Gunstar Super Heroes follows the almost Super Sentai-esque space-faring warriors Red and Blue who, one year after defeating the God of Ruin, and the Empire, are once again beset on all signs by these titular foes. The Empire is seeking the Four Treasure Gems to resurrect and control The God of Ruin, forcing Red and Blue to travel to the Earth’s various moons to beat the Empire to the Treasure Gems, and ultimately defeat both these existential threats.
I’ll be honest, the story is without a doubt the weakest part of Gunstar Super Heroes, but that’s barely a bad thing in my book. This is a game about punching, about guns, about over-the-top boss fights and throwing in the entire kitchen sink for good measure. It’s very much got that Saturday Morning Cartoon quality to its story - not bad, but just a backseat to the real show. Kicking ass, and taking various color-themed names. 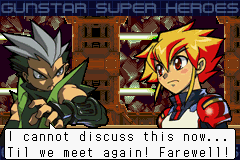 Players control Red and Blue, who play somewhat differently, in the sense of having a couple different moves and ranged weaponry. Your main bread and butter are a number of ranged guns that Red and Blue can unleash on their foes, such as rapid fire energy guns, or a green laser gun that will track opponents in 90 degree angles. Each of Red/Blue’s guns have a bar that’ll slowly fill as you land shots with them - when the bar is flashing, double tapping the shoot button will unleash a powered up version of the weaponry, with various results. A few of the powered up versions really aren’t that much better than the base one - Red’s second gun’s powered up attack barely seemed to hit enemies in the first place - but Red’s first gun pretty much carried me through the entire game, melting mooks and bosses alike. The run’n’gun style, however, does not make up the majority of the game. Whilst classic beat ‘em ups and run-and-gunners usually stuck to their guns, maybe throwing in a brief, overly difficult vehicle sequence for a bit of fun, Gunstar Super Heroes opts to mix things up not just every stage, but more or less every couple of minutes!

Whilst the core of Gunstar Super Heroes is a sort of run’n’gun affair, what blew me away most in regards to its gameplay is its sheer variety of gameplay styles. One stage you’ll be taking control of an aircraft, shooting down turrets, airplanes, helicopters, and missile silos. Next, you’ll be riding some sort of robotic horse… thing, jumping from floor to ceiling as you duck and weave through a veritable blizzard of projectiles. There is genuinely no single stage where you’re doing the exact same things as the previous ones, and this was one of the ways I really got pulled through the game - after the third or fourth time, I thought ‘man, there’s no way they can do something weirder than this’, and then they go and do it anyway!

Easily my favorite gimmick of the game was in the Moon 4 stage, where your chosen character is basically thrown in a screwed up board game. You’ll be rolling dice and moving across various rooms as board spaces, with each room having a unique combat or platforming challenge to overcome. Your dice rolls aren’t random, either - you’ll just have to time your button presses to get you to the exact room you need, and not fall back to the very start!
I dunno; the whole of Moon Stage 4 really stuck out to me as something really, really unique in a genre that’s been done to death, and it’s basically an example of Gunstar Super Heroes' fantastic level of variety as a whole. 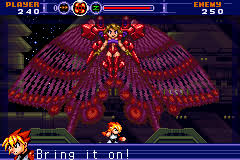 Even playing on Normal, I found this little title to be quite challenging - there are a ton of projectiles, troops, and god knows what else coming at your character at any given time, and you’ll be unlikely to push through a full stage on your first go. One of the ways the game mitigates its own difficulty is breaking up each stage into various sub-stages, allowing you to start at any of them if you die. However, if you reach sub-stage 2-3 with only 10 HP, jumping back in after getting a game over will still leave you with 10 HP. Can’t beat the boss with only 10 HP? Jump back to the start, and go for a better run without losing as much HP! It was a nice little system that balanced not having to start over an entire stage, but also rewarding the player for making their way through the stage as flawlessly as possible.

And you’ll need to be doing these fights relatively flawlessly, as the boss fights are far and away - for the most part - the biggest challenges in the game. None of the bosses are remotely similar in design - one is a fighting a spider-mech, forcing you to try and rotate the stage so you’re beneath the cockpit, whilst another is basically a half-dozen battles in one, as Green constantly shapeshifts between a variety of different forms, each with their own moves to avoid and counter. This all culminates in a genuinely fantastic boss rush sequence in the final moments of the game that really forced me to showcase what I’ve learnt across my time with the game, with pretty much all the fights being highlighted in their own right. The only real shame is that the final boss is such an afterthought by comparison - you barely fight them in the first place, and his ‘weapons’ are nothing more than wet noodles slapping you about. If you end up having more than a fraction of your health yet, you’ll decimate them, without a doubt. It’s a shame it’s such a poor final encounter, as it feels like a bit of an anti-climax after how exciting the boss rush was, and how much this final encounter was built up throughout the game.

Treasure, the developers of Gunstar Super Heroes, seem to have been one of the third-party developers who seemed to know exactly how far the at-a-glance limited hardware of the Game Boy Advance could go. My god, Gunstar Super Heroes is an incredibly, incredibly vibrant and beautiful game. Not only are its bread and butter gameplay sequences stunning to look at, the other main forms of gameplay, like the vehicle segments or the crazy, room-rotating sections are just as fantastic. I don’t know what kind of black magic Treasure was dabbling here, but having not only a wide variety of visuals, but keeping said variety to a high standard is nothing short of amazing.
I don’t personally share this opinion, but I’ve seen people claim that this game has the best graphics on the system outright; I don’t agree, but even I can see that this is amongst the very best, and a perfect example of the kind of genuinely gorgeous output the GBA was receiving in it’s twilight year. Honestly, at times it feels comparable to the kind of wizardry they were pulling off in the SNES days, and considering how underpowered the GBA is compared to that, well, it is quite a feat.
Also, this game has voice acting! Sure, it’s limited to only a couple of lines in boss fights, but the fact that they exist at all is mildly mindblowing for a GBA game! 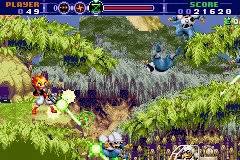 If I had to nitpick a bit, though, is that I feel the game is just that little bit too short. I get it, this is one of those games you play a couple of times, trying out the different playstyles between Red and Blue, maybe shoot for some high scores, but the fact is if you’re decent enough at this game, you’ll probably blow through the story in less than two hours like I did. This short length is stretched out by slightly annoying difficulty spikes and the previously mentioned health-stage mechanic, but the game is still a rather brief affair, no matter how you look at it. It’s not remotely a deal-breaker, but y’all should be aware of jumping into this - especially if you’re trying to grab a genuine, expensive copy off eBay!
But, if you’re playing through it in, uh, less standard ways, this’ll be a great way to spend an afternoon.

Considering how limited my knowledge of the great GBA library was back in the day, I’m not surprised Child Mitch didn’t know about Gunstar Super Heroes, but I can’t believe Big Boy Mitch had no idea this existed! With amongst the greatest audio-visual experience on the Game Boy Advance, Gunstar Super Heroes is a distillation of Saturday Morning Cartoons, featuring an incredible amount of variety from start to finish, likely to satisfy all but the most anal of run’n’gun fans. Whilst a bit on the shorter side and only have a dash of replay value, Gunstar Super Heroes is a ‘hidden gem’ of the Game Boy Advance if I’ve ever seen one, and is easily, at least in these early days of the project, one of the best games I’ve played on The Game Boy Abyss yet.

Thank you so much for reading my review of Gunstar Super Heroes! I took another week off last weekend, because I just wasn’t feeling it, but hopefully I’ll be a bit more consistent, now that I’m off work for a few weeks. Not quite sure what game I’ll be playing next, but I expect it to be something on the shorter side - maybe another licensed game, or just something utterly relaxing.

Also, as a bit of more exciting news, I’m -hopefully- going to be streaming on Twitch in the new future! I plan to be tackling some of the more longform, or extremely short form games in this manner, as streaming is something I’ve wanted to try my hand at for a long time now! You can find me at www.twitch.tv/gameboyabyss , so follow if you want to know when I go live, or follow me @Lemmy7003 for the same info. Thanks so much for reading the Game Boy Abyss, and I’ll see you next time!