Sometimes, you find that special game. The game that changes everything for you. Something with graphics that epitomize not only the platform is launched on, but everything that came before it. A game that made me laugh, made me cry, made me ponder life itself. There isn’t anything else like this game; before, after, it doesn’t matter. This game is special. 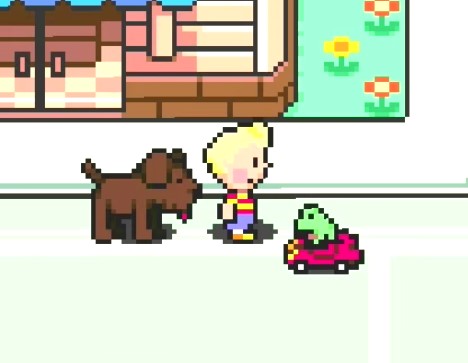 I mean, how many games feature a frog in a car? A frog, riding a car, doing only the greatest service for the player. A frog that is iconic to not only gaming, but to anyone growing up in the early 2000s. I mean, who didn’t hear the sound of this iconic frog? Sure, he didn’t speak English - or any language I could discern - but we all know him. We all love him.

I’m playing goddamn, fucking, Crazy Frog Racer. This is my lame-ass April Fool’s joke, have fun. The only joke is on myself.

Crazy Frog Racer : But The Joke Was On Me

To start with, I think the racing genre on the Game Boy Advance was pretty abysmal, not gonna lie. I didn’t like Mario Kart Super Circit when I tried it out a decade ago, there are some abysmal tie in games - though I haven’t played Konami Crazy Racers, which I’ve heard is quite good - but I think there’s just a point where racing isn’t in the lifeblood of the Game Boy Advance. But none of these games hold a candle to the absolute magnificent turd that is Crazy Frog Racer. My god, I expected something bad. I mean, it’s the goddamn Crazy Frog, the Annoying Thing that graced pay-to-view TV (at least in Australia) a couple of times an hour around fifteen years ago. But I didn’t expect this… This game didn’t leave me laughing, or gnashing my teeth in rage. I just felt empty. 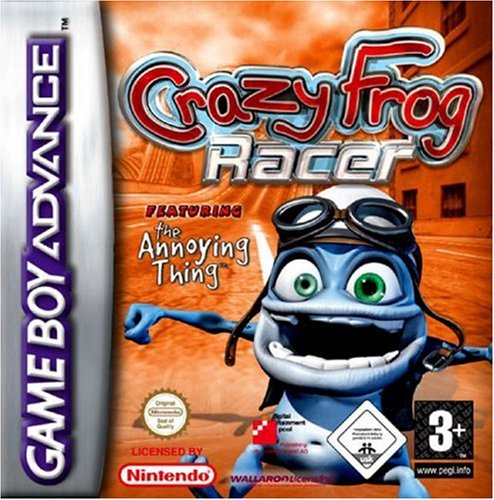 Empty for the fact this game exists.

Empty for the fact that people probably paid full price for it.

Empty for the fact that I had to play it. I had to do something funny for April Fool’s, huh? Ain’t I jokester?

This is the most barebanes racing game I’ve ever played. How much can I actually talk about it? You drive through totally flat, uninspired tracks, trying to avoid people ramming you off the side - which, let me say, happens literally all the time. They tap you ever so slightly, and off you go, off to the side, to spend the rest of the track trailing after everyone. Talk about fun, huh. Well guess what - nothing about this game is fun! It’s just… ugh. Okay, so there is more then just racing. I guess. Like every kart racer of this genus, Crazy Frog Racer has crates placed across the track, which running into will grant you an item that’ll do… something. Some of these, like the purple motorcycle handles (I think? I spent some time thinking it was a killer whale) will grant you a massive boost until you slow down, you’ve got missiles, and some… wheels that do… something? I genuinely couldn’t work out what they did. They didn’t make it easier to go ‘off-road’, I didn’t feel faster, I genuinely had no idea. Honestly, if I didn’t get the speed boost item, I was disappointed, since if you’re ahead you literally don’t need anything else, but if you’re behind, they just don’t feel impactful enough to close the gap with the other racers. Seriously, send me a message if you know what the wheels do, I genuinely couldn’t work it out, and I could not care enough about Crazy Frog Racer enough to actually look it up. Hey, I played this game, y’all have to do something for me.

Worried that you were only going to play as Crazy Frog, or as he’s referred to in-game with a big ‘ol arrow The Annoying Thing? Don’t worry, all his iconic friends are here, too! And by iconic, I literally don’t know who any of these people are. We’ve got such heavy hitters as Punk Girl, Dream Boy, and who could forget the one character who exists in all our public consciousnesses, Big Elk. Seriously, who the hell are these other characters!? Sure, I’m up to date with The Lore for the Crazy Frog, but I have never, ever ever EVER heard of literally any of these characters. And whilst I thought I”d found a soulmate in the form of Big Elk, I quickly realised something about this game. The devs for this made this game, and then consciously decided to make the balance as awful as possible. Seriously, if you’re not playing as Crazy Frog or Dream Boy, you are gimping yourself. Their stats are just objectively that much better then literally anyone else in the game you are just making the gamer harder for yourself. Speed, acceleration, turning - they just do everything so much easier. I tried out Big Elk, but he was just awful at turning, and considering the only difficulty in the later tournaments is just the amount of turns they throw at you, I lost only because I kept running into goddamn walls because I couldn’t bloody turn! Why would they do this!? Why would they make this game so unfun!? 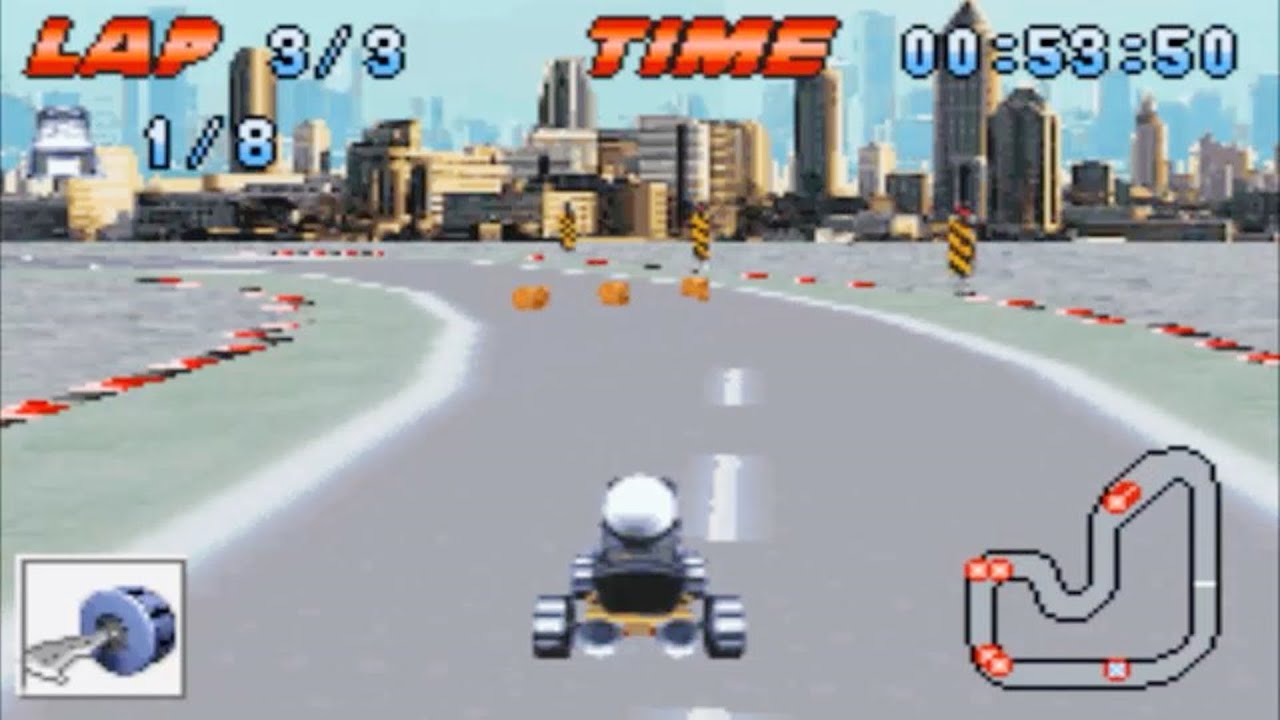 The game modes are as spartan as you’d expect; there are three tournaments, across three cups - though I couldn’t notice any difference between them sans the maps growing more complicated, by which I mean they just have more turns - which consist of a total of twelve different maps. They are, as far I can tell, spread across a couple of biome designs, but they all feel exactly the same in every way. I couldn’t pick out any of them and remember anything about them… with uh, one exception. We’ll get there. It’s literally the only thing I liked about this game. Which… man, that’s really depressing, isn’t it? But, yeah, there doesn’t seem to be any real difference between any of the cups, especially in terms of difficulty - in fact, I somehow did worse in the bronze cup then the gold one! What the hell…

Beyond the bare-bones tournament mode, there are also time trial modes where you simply have to get around the tracks before the time runs out. One of these has you just playing on the track by yourself, whilst the second is exactly the same in every way, except for the fact you’ve got seven other races trying to ruin your day by bumping into you ever so slightly, costing you any chance of completing the mode. Genuinely, the former mode almost put me to sleep; the tracks aren’t difficult enough to fail without anyone else to get in your way, but the latter mode is way too chaotic and, honestly, reliant on opponent RNG to feel fun in any conceivable way. Matters are made worse when there really isn’t any way to track which time trials you’ve completed, making the entire point of it to be ‘just do it for fun’. At least in the tournament mode, you had a bit of a record based off your score, and the fact you’re unlocking ‘harder’ races, but I feel the time trials should have… y’know, literally any way to record your wins!? ‘Just do it for fun’ is pretty much the worst thing you can do in Crazy Frog Racer, to be honest. 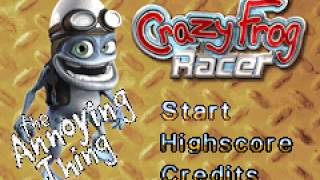 Literally one of the only things that brought me joy in my 36 minutes with this game - that’s right, it took me 36 minutes to beat three cups, and try all the modes! - were some of the map designs. Not the designs themselves - they’re all overlong, blend together, and have way too many turns for a game that has such terrible turning - but how they look on the map. One cup absolutely looks like each of the maps draw inspiration from parts of The Annoying Thing’s body anatomy… and that ultimately leads to one of the maps looking like a bit of a wang. Which, I have to say, is a bold choice to include on the Game Boy Advance. But that’s it. That’s literally the only thing I like about this game, and it really has almost nothing to do with playing the game. Think about that - the only thing I like about this game is the fact that a map looks like this unholy creation’s knob. What the hell have I done?

Crazy Frog is a masterpiece, by which I mean, a masterpiece in how to not make a kart racer, or a racer, or in fact, a game in general. Every single element of the game, sans the previously described phallus map, is either frustratingly bad or exhaustingly boring. I can’t believe I’m saying this, but I’ve found a game worse then American Idol. American Idol made me laugh - Crazy Frog Racer made me want to find religion, or take up smoking, or becoming an alcholoic. In 36 minutes! Any longer and it probably would’ve killed me. This is everything, EVERYTHING bad with licensed games; the length, the gameplay, the variety of modes, everything fails at it’s most basic tasks. From now on, it shall be my most solemn duty to destroy as many copies of this game as possible. This I swear that they will fall to the deepest, darkest reaches of the Game Boy Abyss, where no one else will ever, ever, have to find them.

Thank you so much for reading my torment, uh, review of Crazy Frog Racer! I’ll likely be moving my publishing dates around a little bit - it’s nicer to have a bit more of a freeform schedule then sticking to every Wednesday night, but we’ll see! I’ll still try to get a review up once a week, but you never know how my week will pan out! As always, you can find me on twitter @ Lemmy7003, or you can email me at cckaiju@gmail.com. As always, thank you again, and I’ll see you in my next review!