Bookworm - Burn Down The Library! 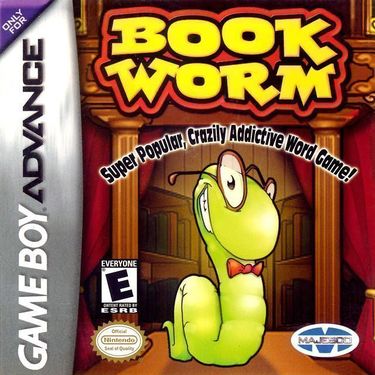 Bookworm, for the Game Boy Advance. The game that called me a Nazi.

Seriously, look at this image. That is a 100% a generic non-Nazi Nazi, right!?

When I was very, very small, my mum, like many, many people, was addicted to Bejeweled, arguably developer Popcap’s most famous game (at least to people like me who can actually remember what Bejeweled is). I never really understood it as a kid, or why she enjoyed playing something so ‘boring’, even though I can see it’s the simplest thing in the world at this age. Well, I digress; today’s review is on another of Popcap’s classic titles, albeit one that I think isn’t as well known as the heavy hitters, like Plant Vs Zombies or Bejeweled, but the one that I’d say is probably my personal favorite: Bookworm for the Game Boy Advance.

I literally only learnt of this port’s existence a couple of weeks ago. I was hanging out at my sister’s birthday party, and the topic of the Game Boy Abyss came up; for a laugh, my sister started reading out all the ‘bangers’ she could find on the Game Boy Advance’s wikipedia page, and I was nodding away, thinking ‘How far in the future -will- I play Advance Wars?’ when she drops the proverbial bomb that you can play goddamn Bookworm on the Game Boy Advance. Now, you young people (I’m sorry, I know you’re all probably older than me, let me have this) never experienced the joy of Bookworm, but there was a good week or so… probably nearly twenty years ago, that I was addicted to playing this game at school, and considering this is a title all about improving your spelling and whatnot, it was one of the few games my teachers were happy with us playing.

Bookworm, like many of the early Popcap games like Zumba or Bejeweled, is a pretty simple concept turned addictive. You’ll be presented with a wall of letters, and your job is to connect as many letters as possible into a word - completed letters will disappear from the board, dropping more downwards, allowing you to make new words. After earning a certain amount of points, you’ll go up a ‘rank’, so to speak - basically, the game gets harder. You’ll be getting harder letters to deal with - the dreaded letter Z still haunts my dreams - and you’ll soon find yourself dealing with ‘flaming’ letters, that for every turn they aren’t used, will burn further down towards the base of the letters. If a flaming letter touches the very bottom of the screen, the library goes up in flames and the game ends. There’s also a few chances to earn extra points thrown in, like certain words it’ll ask you to spell, or gold and green tiles that’ll reward a ton of points, especially if you get multiple in a row.

And that’s all there really is to Bookworm, overall. Popcap’s games were never known for being overly complicated or in-depth, but that’s never -why- people play it. I probably played Bookworm for dozens of hours when I was a student, and whilst I don’t nearly have enough time to be able to do that these days, I could totally imagine a world in which I could. More than once I found myself wiping out after a good, half-an-hour run, and rather than doing anything I actually should be doing, booted up another run and had a ball doing so. It’s also nice to see that I still have a decent enough vocabulary to not eat all the shit in the world. Considering this game is about twenty years old, the amount of words you can create is pretty sizable; it was pretty rare I found myself unable to pull a desperate, disparate word out of my ass to save myself, and all the examples I can think of words not actually working was when I had a letter ‘Z’ on fire, at the very bottom of the pile… you can imagine how that went, now don’t you? Honestly, these moments, when you let a letter fall just -that- little bit further then you really meant to, are amongst the most entertaining. The mad dash to find a word - literally any word, as short or as long as you can manage, and these grow in entertainment and frustration in equal measure as the fire tiles grow in complexity and frequency - my best run ended when I had a pair of ‘Z’ and a ‘Qu’ fire tiles right next to each other. Good fun, there.

Now, this, erm, main mode for Bookworm is all well and good, right? Well… the big issue is that there literally isn’t anything else. Now, from a puzzle game, ported from the PC to the GBA, I don’t expect much at all. Besides, the main mode is fun, right? Well, I’d hope so, because they couldn’t give us anything else. No form of challenge modes or modifiers, not even a little Time Attack setup to play around with. Bookworm starts and begins in its core mode, just slowly growing more and more difficult, stressful, and chaotic without any other way to experience it. It’s disappointing, to be sure. My expectations were low, and they somehow were still let down; this is such a bare bones port, with content taken -out- from the PC version… it just really blows to have such a reduced product. I know, I know, the GBA is a much smaller system in storage and power then a PC, but it’s Bookworm, for god’s sake. How much space could it possibly be?

As an aside, it should be noted I had a bug (ahahahah) pop up a few times in my sessions with this game. Whilst for the most part the game ran perfectly fine, occasionally I’d find myself unable to submit a word, no matter what selection of letters it consisted of. It wasn’t a huge deal; I simply had to save my game and reload it again, but it was a little strange. It should be noted I was playing with an emulator, so it could simply be an issue of playing it that way. Food for thought, anyway.

Despite suffering from somehow even less content that it’s base version, Bookworm for the GBA is an honestly pretty satisfying way to fill ten to fifteen minutes; with its pick-up-and-play attitude, addictive gameplay, and charming visuals, it’s a perfectly serviceable way to play one of the most classic games I think of from my childhood. It really could use another mode or two to give you at least a new spin on the way you spell, but as it is, I’m perfectly happy to just be screwed over by the letter Q, one more time.

Thank you so much for reading my review of Bookworm! A bit of a shorter review this week - half because, I mean, how much can I say about the game Bookworm, and half because I’ve just started a new work schedule, and I am beyond exhausted. Hopefully we’ll have something meatier than week! As always, you can find me over @Lemmy7003 on Twitter, or you can email me at cckaiju@gmail.com if you have any questions or requests for games. As always, thank you for reading, and I’ll see you in my next review.