By a random twist of fate, the last few months of my life has been this weird ‘Batman hyperfixation arc’. I’ve played through all four Arkham games, watched a myriad of animated movies, and the new Batman flick, and with me just finishing Arkham Origins mere days ago, I felt now was a sensible time to play one of the several Batman titles available on the GBA. For a bit of preparation, I took a look at some longplays for each of the games, and… well. Uh. Batman games on the GBA aren’t quite the level of quality you’d hope for. Either way, this week on the Game Boy Abyss, we’re taking a look at the first - and, arguably best looking - Batman game on the Game Boy Advance: Batman: Vengeance. 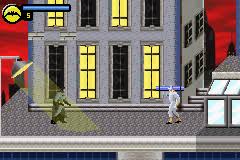 In all honesty, Batman’s history in regards to video games haven’t been that great. A majority of it’s older titles are samey, side-scrolling platformy-esque titles, though there is a beat-em-up or two thrown in that are genuine fun for good measure. Honestly, for a while one of Batman’s best titles was a LEGO game of all things (and not the best LEGO game by a long shot, at that). And then 2009 rolled around, and we got Batman: Arkham Asylum, a beat-em-up, Metroidvania-esque adventure that received critical acclaim and universally decreed the greatest Batman game of all time. Honestly, one of the downsides to this golden age of Batman games Arkham Asylum ushered in was kind of throwing every previous Batman game into its shadow. But maybe it’s not all bad! I haven’t played the vast majority of these pre-Arkham titles, so maybe we’ll find a diamond in the rough.

Maybe? Listen, I’m gonna be playing a lot of games on this website. I gotta try to have some optimism, right?

Now, when I went into Batman Vengeance, I expected the normal ‘superhero license game experience’. Y’know, side scrolling gameplay, basic punching, maybe a touch of light puzzle story. And whilst Batman Vengeance does pay heed to these expectations, it actually has a surprising amount of variety for a game like this. Uh, that sounds harsher than I meant. Anyway, Batman Vengeance has four major types of levels; you’ve got the basic Batman levels, where Bats’ traverses side scrolling environments, beating up crooks, ice people, and plants whilst having a touch of platforming as a treat - these style of levels also make up the smattering of boss fights interspaced between other levels. The second type has you playing as Robin in more puzzle-focussed segments, normally requiring you to solve sliding block puzzles and brain teasers of that variety. The third and fourth are vehicle based segments; the first variety showcasing the Batmobile, having you weaving through obstacles before time runs out, whist the other features the Batplane, which is essentially a side scrolling bullet-hell that you just have to -somehow- survive to reach the end of the stage. I wouldn’t go so far to say any of these, sans maybe the Bat-sidescrollers as good, so to speak, but it’s not to have a sense of variety in literally any game. It is the spice of, uh, something, I guess.

Unfortunately, that spice is extremely varied, and not in a particularly good way. Sometimes the spice shouldn’t flow, y’know? 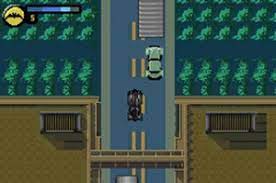 Easily the worst of the bunch are the vehicle segments, for both similar and notably different reasons. The Batplane is easy to explain - these segments are flat out terrible, being multi-minutes long, requiring you to survive constant projectile assaults but only giving the Batplane a handful of hits before going down. The game does counteract this with a shield you can pop for a few seconds, but it takes waaay too long to recharge. Full disclosure, after dying a dozen times on the second Batplane segment, I just decided to find the password for the next level and skip it outright. Seriously, Batman has some of the greatest technology in the world at his disposal, and his Batplane - arguably his foremost piece of tech - crashes AFTER THREE OR FOUR HITS. Batmobile levels aren’t quite as bad, but they have their own set of issues. The basic goal of these levels is to reach the end before the time drops off, with trucks, potholes, enemy-specific threats and god knows what else barring your way. Knocking into threats will not only slow down the Batmobile, but it’ll also reduce the timer by a couple of seconds, and you’ll quickly work out that those obstacles will stack up hard. Seriously, with the speed these segments go, you’ll have to memorize the vast majority of obstacles or you’ll just flat out not win. The amount of times I failed the Poison Ivy Batmobile segment with what felt like centimeters to go is way more than you’d expect, and it drove me insane. I beat it, eventually, but god it made me hate the Batmobile waaay more than it ever did in Arkham Knight. (Arkham Knight is better than people give it credit for, by the way ;) ). Also, Batmobile, arguably a lesser piece of tech then the Batplane, doesn’t blow up from being hit by like, two projectiles. Hmm. Hmm???

Batman and Robin’s sections aren’t exactly what I’d call amazing, but they get the job done; Batman’s side scrolling, platformer-esque stages were fun enough for what they were, not really having any real surprises to them; seriously, you’ll just be moving from right to left for the most part, punching a few baddies, and using a tool or two when prompted. Though, uh, I’ll suggest you give Bats a good amount of room when you leap across gaps - there were more than a couple of times I was 100% sure I’d made a jump, but Batman just tumbled into the darkness. Fun stuff, really. Robin’s stages are probably the best of the bunch, taking a more puzzle-focused direction. These top-down exploration segments are easily the most varied of the bunch, not really having a totally linear path, but requiring you to properly explore the area around you to find out how to progress, and actually having a couple of pretty cool toys to play with. Seriously, I always had a good time using the little remote-controlled car, even if the segments were short as hell. Honestly, if this was more of an actual ‘Batman and Robin’ game, just focussing on these two styles of gameplay… Well, it wouldn’t be an amazing game by any stretch of the imagination, but I’d certainly be coming out of it a lot more positive then I am now, y’see?

The only other real shake up to the gameplay is a smattering of boss fights - though they aren’t really that actiony at the end of the day. For the ones that I tried out, they feel very reactive in nature, but that isn’t really a bad thing. It’s mostly just throwing a couple of Batarangs at Joker, or knocking back Mr. Freeze’s attacks. They’re all fine, but didn’t really elicit any kind of reaction from me. Eh. Additionally, once you complete the story, there’s a second, harder difficulty to tackle, where you’ll be taking more damage, and have to explore the relevant levels to find a number of discs to progress; I didn’t tackle this mode, but from what I’ve read it generally just seems a way to pad out the game time a bit longer. Good for those who dig the game (I’m sure y’all are out there), but otherwise, it’s just a bit of a tacked-on extra. 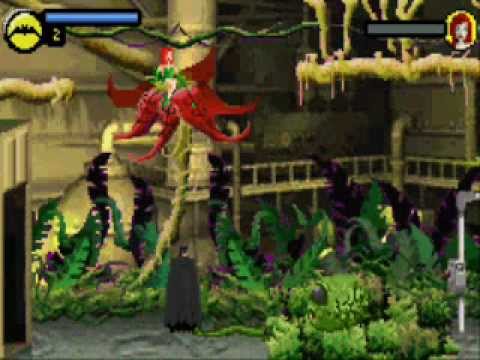 One thing that genuinely made me laugh, though, was this game’s password system. Yes, this is one of those games that does not have a traditional save system, but instead at the end of every level, Alfred will shoot you a password that’ll give you access to the next level in case you have to switch off the game. Usually, though, these passwords in most games are a random collection of letters, but for some reason in Batman Vengeance, they’re all names like ‘BRUCE’ or ‘QUINZEL’ or ‘DRAKE’. If you know anything about Batman, there is a good chance you’d be able to just guess the password and skip half the game. I dunno, that just really tickled me.

On an audio level, this game is horrendous. I want you to picture in your head what the ‘average’ GBA game sounds like. You know, the kind of echoey, tinny sound design that really doesn’t sound like any tune in particular, but rather a bizarre cacophony of sound-esque noises. Well, somehow, Batman Vengeance sounds worse than that. I wish I could harp on the graphics the same way, but they’re… they’re fine, I guess? I may have burst into laughter whenever I saw Robin’s tiny little sprite in the puzzle segments, but considering this is very clearly a budget title, the game is perfectly serviceable. Honestly, it’s just more entertaining than anything - a lot of the enemy designs in the Batman segments are so small and compressed I genuinely had no idea what I was actually looking at - seriously, the ice guys in the Mr Freeze level, what are they!? They don’t look quite human, but what else would they actually be!? I’m thinking waaay too hard about a fucking Game Boy Advance game, aren’t I? As an aside, I think the easiest way to tell if a game is a cash-in licensed game is the whole ‘Oh, this game was originally a console title but we didn’t want to create new assets or cutscenes, so we’ll just slap jpegs of the cutscenes with text below them.’ I genuinely don’t think I’ve ever seen a game that did this and was actually fun to play. If you have, please let me know so I can play an actually good licensed game sometime.

Batman Vengeance isn’t nearly the worst title I’ve played on the Game Boy Abyss, but it certainly isn’t doing itself any favors. The best thing I can say about this title is that if the whole game was just the Batman and Robin segments, it’d be just fine - nothing more, nothing less. But the fact is that the Batmobile and Batplane segments are so frustrating, and so outright janky and punishing that it just made me drop the game outright. If you’re a Batman fanatic like me, this game is worth playing for a laugh, but otherwise this is just another below-average licensed game experience that really isn’t worth you time.

Thank you so much for reading The Game Boy Abyss! This one is coming out a little earlier then normal, partially because I didn’t upload it on my normal day, and partially because I’ll be away at Smash! Con this weekend in Sydney. Not sure what next week’s game will be, but I’m sure it’ll be a Game! Ahahaha… I’m lame. As always, you can find me over at twitter @lemmy7003, or you can shoot me an email at cckaiju@gmail.com Take it easy, and I’ll see you at my next review.